Taking in the view (of Rugby cement works)

It was a glorious weekend so I went camping with my sister and our other halves. She lives up north and I down south, so we met in the middle, at a pleasant site near Rugby.

I hadn’t been camping for years. Back then it involved hitching lifts, backbreaking rucksacks and tiny tents that took hours to put up and were always missing a crucial pole or peg and would collapse when the heavens opened. This was different. We had cars full of spacious tents, quilts and airbeds, chairs and stoves, beers and wines, homemade rice and cake. This was middle class camping.

The idea was to go for a long walk and soak up the local scenery. One of our party printed a 9KM trek off the internet, replete with directions and grainy photos of local beauty spots. There was talk of wild rivers so we packed swimwear and sketch books. There was a pub stop midway. It was perfect.

Twenty minutes later we found ourselves walking round a housing estate. The directions referred rather vaguely to “squeezing through a gap in two houses to find pastures green”. We asked the postwoman who pointed us to the local hair salon. “Go left at the church,” they said. We did and whereas we didn’t find these two houses, we did find pastures green. The walk was on!

It soon became apparent we weren’t good at following directions off the internet. “These are rubbish directions,” we said as we circumnavigated yet another field only to find a non-existent stile before backtracking. It was hot, hay fever was out in force and water supplies were running low. The only view we had in our sights was Rugby Cement Works. Eventually we found ourselves on a B road and followed it. Two miles later we were at a pub. Hurrah. We could charge our phones and work out how the hell to get back.

I’m ashamed to say we couldn’t work out the scenic route back either and walked three miles on the dual carriageway. At one point I misread the signs on the map app and we had to climb over the motorway barriers on to a roundabout. We arrived back to site, hot, tired and fractious. The friendly owner Lynne asked us about our day. Had we, she wondered, swum in the nearby lake or walked down the picturesque canal? No, we hadn’t, we explained. Instead we’d taken in one housing estate, one B road, one dual carriageway, one roundabout and one cement works.  Still, it’s nice to get out of the city. 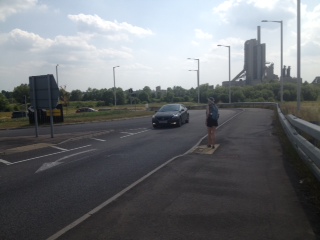 PS I’ve been told that for SEO reasons, I need to include the key words ‘journalist’, ‘author’ and ‘teacher’ in my blog posts. So there you go.